The following article presumes a working knowledge of both Logical Levels and thechakras. For those of you who would appreciate information in greater detail, there ismuch literature available on both subjects. My personal favorites are Robert Dilts forLogical Levels, and Anodea Judith and Caroline Myss for the Chakras.

Also, in the interests of both time and space (illusions though they may be!), it willbecome obvious that the extensive thought processes that gave rise to these insights havebeen abbreviated. My intention is not to give you answers, but to share the questions. 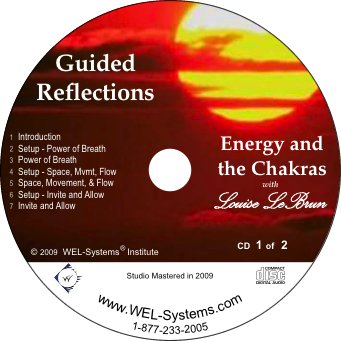 Your brain, as well as any other biological or social system, is designed to processinformation in varying chunks, or levels. These levels represent information processingfrom the very general to the very specific – or vice versa. Your brain has a predictableway of processing this information that relates to both the experience of thinking andthat of being.

In the NLP community, the original thinking about these “logical levels” wasthat there were five levels of processing, each encompassed in the level above it. Theyare best described in the words of Robert Dilts:

“From the psychological point of view there seem to be five levels that you workwith most often. (1) The basic level is your environment, your externalconstraints. (2) You operate on that environment through your behavior. (3) Yourbehavior is guided by your mental maps and your strategies, which define your capabilities.(4) These capabilities are organized by belief systems and (5) beliefs areorganized by identity.”

Since this work was done in 1990, these levels have evolved to include a sixth, spirituality.I invite you to consider the possibility that there is a seventh logical level so subtlethat it has gone undetected, as it is the larger context within which several of the otherlevels unfold.

We know that we presume there to be seven major chakras. Over the past seven years ofworking in programs and individually with clients, particularly when I was working withthe chakras, I’d notice that there were seven chakras and only six Logical Levels. Howcould this be? I was struck by the correspondence between the chakras and the LogicalLevels, and felt certain that a pattern must be completing itself. As I played with itover the years, things began to fall into place.

The following very abbreviated and simple journey through the chakras and LogicalLevels may encourage you to consider the correspondences for yourself.

The Root chakra is about being grounded. Naturally, it corresponds to the earthelement. We believe that the very light, very fast energies move down from the Crownchakra through to the Root chakra, manifesting thought in physical space and time. Itmakes perfect sense that there is a connection between the earth element, the Root chakraand the experience of our personal, physical surroundings in their myriad manifestations.(Logical Level – Environment: Where and When.).

The second chakra is the seat of emotion in the body, often referred to as the wateryarea. Feelings are held in this part of the body. The element here is water, magnetic andwith the power to draw to us experiences which allow us to notice the emotions that areheld captive in there. Our behaviors are driven by our emotional states. Our sense ofresourcefulness or resourcelessness leads to specific behaviors. (Logical Level -Behaviors: What)

The third chakra, the Power chakra, is the center of the ability to take action. It isfrom this area that I experience the energy that powers my capacity to act. The fuel (andthe element) is fire, combustible and resulting in movement, either slow (embers) or rapid(explosions). The conduit for the expression of this energy – what forms the channelthrough which this energy can flow – is my capability, meaning my ability to determine theappropriate course of action into which to direct the powerful force of movement. (LogicalLevel – Capability: How)

And here’s where things get interesting. The fourth or Heart chakra is considered to bethe center of identity – but at what level? My belief is that the Heart chakra is thecenter of who I think I am, that collection of beliefs, values and attitudes thatare the by-product of habituated responses and early cultural conditioning. But is it reallywho I am, or just who I think I am? Or worse, who I have been taught tobelieve that I am? The element associated with this chakra is the air element. Airrepresents movement and change. If the chakra is open and air is moving freely, then mybeliefs are subject to movement and change, thus allowing for and ensuring growth andexpansion. If the chakra is closed, or if my heart is closed, my beliefs, values andattitudes are like concrete – and have become immovable. We even talk about how the hearthardens, or turns to stone.

The fifth chakra is the Throat chakra, the seat of self-expression, the gateway forrevealing who I am to the world. It is the way that I make myself heard in the universe.The element associated with this chakra is sound (sound waves). The sounds that we make,through speech or through the symbol of speech – the written word – are the physicalimpressions of our presence in the world.

The sixth chakra is the Third Eye, the center of ethereal sight. Through and with it,we can see beyond what is to what can be. The element associated with this chakra is light(light waves).

Whether we are conscious of it or not, we are always choosing. When we are silent, ourabsence of speech is a choice. Over the last years, I have been struck by two things in myprograms: how common it is that people do not recognize they are choosing and that thereare never any exceptions; and also that all behaviors have consequences, whether we noticethem or not. So change does mean consequences, but there are also consequencesassociated with no change. This underlying process was completely transparent tothose who were doing the choosing. Yet, at each of the Logical Levels, we are choosing.

I believe that at the Heart chakra level we carry the past of who we have beenconditioned and taught to believe we are. We carry the conditioned responses that manifestthrough those beliefs, values and attitudes. And I believe that at the Third Eye, we carrythe potential to “see” who we are capable of becoming; to recognize grace andperfection as our birthright; and to hold that as a model or standard for expression. Atthe level of the Third Eye, we can know our own magnificence.

The throat is the gateway to sound; it is the junction of the internal and theexternal; it is the point at which information from the Heart chakra collides withinformation from the Third Eye and its messages of possibility and magnificence. It isthere where I must choose which will direct my life. It is there where this struggle isresolved and the resolution is put forward, into physical space and time, for all to hearand know; it is the point at which I either choose to decloak and move toward who I AM, orto stay cloaked, to await the next opportunity for expression – with these opportunitiesnever-ending.

The first through the fourth chakras carry history; the sixth and the seventh carrypossibility. The fifth chakra, at the throat, is the link between these points in time aswell as the platform on which we stand in the “now”. This platform is myconnection to what I perceive as the outside world. As I stand on this platform in thepresent, do I speak from history or do I speak from possibility? As I choose mindfully,information from the higher chakras moves into the lower ones, disengaging me frommultiple dualities and allowing for the integration, in the full body, of new insights.

The throat is the point at which we choose either to continue to repeat our experienceor choose to make different sounds and create a new expression of ourselves. Do I continueto express myself from the Heart chakra, which carries history and training, or do Iexpress my Self from the Third Eye, which holds and defines what I am divinely capable of?Do I express in a way that I always have-do I say yes when I want to say no because it isthe nicer thing to do-or do I stand tall (notice the sixth chakra is physically higher inthe body than the fourth) and express something that is much more a reflection of who Iknow my self to be – and to be capable of becoming.

If there is conflict between the fourth and the sixth chakras, there will likely bestruggle in the throat. If the rules (in the fourth) always bump up against what I believeis possible (in the sixth) I get tension in the throat: which do I speak myself to be?When the path clears from the fourth through to the sixth, expression flows easily,smoothly – and is free to change as air moves through the fourth chakra, bringing newinsights and awareness to beliefs, values and attitudes (for example, I have the right tochange my mind.).

The throat is also located at the narrowest, and by extension, most fragile point inthe physical body. Here, the spinal column and major arteries are at their leastprotected. In our decision to choose mindfully, we are at our most vulnerable and our mostfragile. We risk taking what has been secret and making it public for all to hear, see andjudge. We have laid ourselves bare.

This level of thinking has to be identified and articulated. It’s huge in itsimplications, given that we are choosing at every level. The question then becomes: are wechoosing mindfully, or are we mindlessly dancing to habituated responses? Positioning itat the level of the fifth chakra – a very high level – draws our attention to our vehiclefor self-expression (sound and speech), as well as to the profound implications of choice,which are about identity, self, who I AM in the world.

Until we mindfully, consciously choose to be greater than our experience, ourexperience will be what defines who we are. And since our experience is limited, we too,will fall short of what holds power and possibility for us. To make choice a conscious,mindful volition at all Logical Levels is to bring out of the darkness the very act ofpower which, by default, is causing us to hold and maintain the status quo. Anything wecan name, we can make real and visible in the universe. Once visible, its power can betapped and expressed in a way that moves us even further into the Light.

*Please note that the word “element” is used loosely forpurposes of drawing relationships among these three thought systems.

This article was originally published in the
Journal ofthe American Board of Neuro-Linguistic Programming,
Fall ’97, PP. 3 – 5.

If you enjoyed this article, additional information is provided on the CD sets Pathways to Personal Power and Guided Reflections – Energy and the Chakras and also in the book Phoenix Rising all by Louise LeBrun